RILEY Collier-Dawkins' football story began where most do: in the front yard of his home, kicking the ball back and forth to his parents.

He would make one take the speccy bag and the other throw the ball as high as possible, before he ran and jumped to take mark after mark.

He would go to the park at night after primary school and after more than an hour would say he needed to kick 10 straight goals before heading home. He would kick nine and then, magically, spray the tenth shot, meaning he'd need to start over and stay a little longer.

But Collier-Dawkins' personal story is a little different to most of the boys who will be picked at the NAB AFL Draft this week.

Both of his parents are women – Chris Dawkins and Jacinta Collier – after they decided a decade into their same-sex relationship that they wanted to bring a child into their world. And that's meant plenty of things, including the need to master a drop punt.

Obviously you worry about it internally, because you never want anyone to hurt your child. But he's never really had any issues - Jacinta Collier

"Funnily enough, Jacinta and I have taught him everything he knows," Chris said with a laugh this week.

"Sort of," Riley butted in, smiling. "No, they have been really good, especially with teaching the fundamentals at a young age and they were happy to oblige. I didn't have many other people to do it with and they were always happy to join in.

"I think most people would probably think I do it on my own, but sometimes I like to get both mums involved as well. It's made the drills a bit more fun."

He is a ball-getter who excelled in the Oakleigh Chargers' finals series – averaging 21 disposals and a goal in the three games – and has recruiters excited about his potential.

He looks up to Carlton star Patrick Cripps, and scouts see similarities in the pair's development at the same age.

It has been quite the rise for the big-bodied midfielder, who has shot up to 193cm after missing selection for Vic Metro's under-16s side.

It was then that Chris and Jacinta saw a change in their son. He made sure being overlooked wouldn't happen again, setting up a whiteboard in his room and jotting down short and long-term goals.

"I see the whiteboard every day and it's been a few years in the making just waiting at the bottom of the board to be ticked off. If I get drafted I'll be ticking it off, that's for certain."

Also at home is Collier-Dawkins' most prized possession, a framed jumper signed by Sydney captain Josh Kennedy. The family are Swans supporters – Jacinta grew up in Melbourne attending South Melbourne games at Lakeside Oval and Chris is from Sydney – and when the Swans won the flag in 2005 they took Riley to the celebrations the following day.

"We were lucky enough to get a spot right opposite to where the bus pulled up. We saw the premiership cup and the players and it wasn't long after that that Riley said he wanted to be an AFL footballer," Chris said.

Collier-Dawkins understands the interest people have had about his parents, but hasn't ever thought of his home life as anything other than normal. He has met his biological father, an old friend who offered to help as the pair were investigating their options (Jacinta carried Riley), but he wouldn't change what he has. He was interested when he was younger, but not worried enough to ask.

"To be honest, I wondered but I didn't really question why. I was just really happy because both of my parents raised me well and taught me good morals," he said. 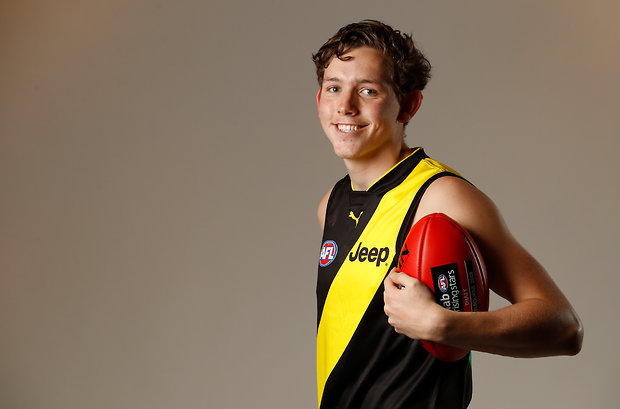 "I can see how it's not typical or normal, and I understand why people want to ask. But internally, it's been so regular for me that I question why they want to know. It's normal for me. I can see why the outside perspective is so interesting, but it's been the norm for me."

It's been that way through the familiar faces Collier-Dawkins has had in his life since pre-school, going through primary and secondary school at Salesian College with many of his oldest friends. Occasionally, however, at local level playing for the Waverley Blues in Melbourne's south-east he has received some barbs about his parents from opposition players.

"I've copped it sometimes in games, but that's expected to happen. I haven't experienced any bullying, but I guess they make note of it out on the ground, but I'm a pretty aggressive out there and just want to get the ball," Collier-Dawkins said.

It is something that Chris and Jacinta have wondered about, though.

"Obviously you worry about it internally, because you never want anyone to hurt your child. But he's never really had any issues. I have asked him along the way, especially when you're 14, 15, 16, but we've always been really open and if he has a problem he'll ask us," Jacinta said.

"Because we've had the same set of friends since pre-school, basically, the kids have always grown up with it. You still do worry that people say something and he doesn't want to say something to hurt us, but he's always been really good about it and we've been open about it."

They have also been open about what lays ahead. With only eight of the top 30 picks at the draft held by Victorian clubs, the chances are that Collier-Dawkins will be moving out of his Chadstone home and possibly interstate.

It'll mean lower food bills for Chris and Jacinta – "I do eat a lot," Riley said – but will make for a quieter household and a pet Dalmatian that won't quite know what to do with itself. The 'what-ifs?' have been hard to push out of his mind as the draft has edged closer.

"I've been pretty good but last night I was tossing and turning and trying to work out where I was going to go, but I just confused myself," he said.

"Until Thursday I'll be excited and then when I'm sitting there on the night I'll be very nervous. It's mixed emotions but for now it's more excitement."

Jacinta expects to cry "for a day or maybe two" after the draft, while Chris, too, is looking forward to the next step of the ride. They also expect that, in coming years, there are more stories like their family's.

"There's no room anywhere for any sort of discrimination. We're no different to anyone else in that we go to work, we pay the bills, we take our son to the football," Chris said.

"It will get to the point where it is more common than it is today. 'Riles' might be the first but I don't think he'll be the last to have a different scenario at home to what most of his teammates will have. And that's probably a good thing."

Richmond has used its first selection (No. 20 overall) in the 2018 national draft to recruit Oakleigh Chargers inside midfielder Riley Collier-Dawkins.