Shane Tuck is Richmond’s next Homecoming Hero for the 2017 season.

The Tigers are set to pay tribute to Tuck during the pre-game build-up at this Saturday afternoon’s Round 13 clash with Sydney at the MCG.

Tuck, who played 173 games with Richmond from 2004-2013, will walk to the Punt Road end of the ground, where he’ll be warmly received by the Tiger Army.

He’ll kick a ceremonial goal, then sign the football and present it to a Yellow and Black barracker in the crowd.

Highlights of Tuck’s fine playing career with the Tigers also will be shown on the MCG’s screens.

Shane Tuck was keen to make a name for himself at the game’s highest level when he arrived at Hawthorn via the 2000 AFL rookie draft.

His father, Michael Tuck, had played in seven premierships with the Hawks, captained them, and earned an awesome reputation as one of their all-time greats throughout a VFL/AFL record 426 games.

And, his uncle was a fairly handy player, too . . . Gary Ablett snr.

Young Tuck had shown some promise while playing at TAC Cup level with the Dandenong Stingrays, but Hawthorn wasn’t prepared to claim him under the league’s father-son rule.

The Hawks subsequently provided Tuck with an opportunity on their rookie list, but after three frustrating, injury-riddled seasons he was delisted.

Tuck then received an invitation from former Hawthorn and Adelaide ruckman, Shaun Rehn, to join him at SANFL club West Adelaide, where he had taken over as senior coach.

He took Rehn up on the offer, and proceeded to produce some top-class football with West Adelaide throughout the 2003 season.

Richmond’s recruiters had been tracking Tuck’s progress at West Adelaide, and liked what they saw.

The Tigers made their move on Tuck, taking him with their sixth selection in the 2003 AFL National Draft.

Tuck made a slow start to his Richmond career, having to wait until Round 14 of the 2004 season for his senior league debut, against Brisbane at the Gabba.

Just two more senior appearances followed that year and, at season’s end, Tuck’s name was in the Tigers’ delisting frame.

Ultimately, it came down to a choice between Tuck and fellow midfielder Tim Fleming, for the one remaining spot on Richmond’s senior list.

Given the fact Tuck senior had been a late bloomer at Hawthorn, the Tigers opted to take a punt on Tuck junior, and retained his services.

Tuck, with his superb ball-winning ability, toughness, consistency, durability and resilience proceeded to provide the Richmond side with enormous value over the next decade.

Admittedly, there were times throughout Tuck’s Tigerland tenure, where he fell out of favor with the Club’s coaching group.

On each occasion, however, he showed tremendous resolve to fight back and restore his reputation as a mighty midfield warrior – one of the competition’s premier inside ‘mids’.

When it comes to assessing the AFL career of Shane Tuck at Richmond, the numbers are certainly compelling . . . seven top-10 finishes in the Jack Dyer Medal, over nine full seasons, with five of those top-five placings, and a career disposals average of 23.3 in his 173 games.

Further highlighting Tuck’s reputation as a midfield ‘beast’ is the fact he holds the record for the most contested possessions in a season by a Richmond player – 298, at an average of 13.5, in 2012.

He also holds the Club record for most contested possessions in a match – 23 – which he achieved twice, both during the 2012 season. The first occasion was in Round 12 v Greater Western Sydney at Spotless Stadium, and the second was against Carlton in Round 18 at the MCG. 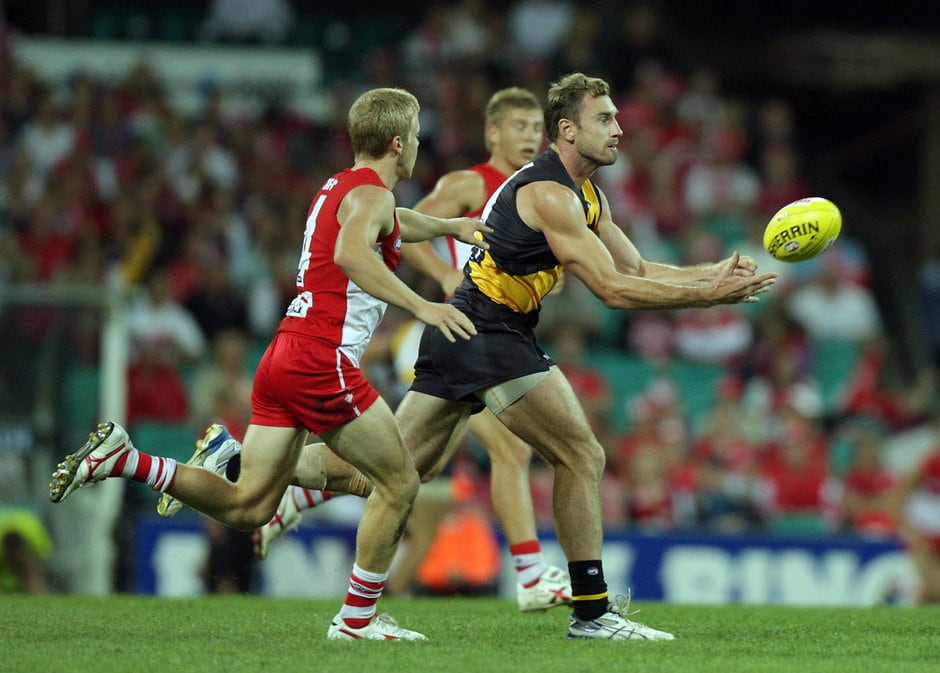 And, just for good measure, ‘Tucky’ is the equal record-holder for the most tackles in a match by a Tiger – 14 v Port Adelaide at AAMI Stadium in Round 10 of the 2010 season.

Every time Shane Tuck entered the field of battle with Richmond, wearing his No. 21 guernsey, he extracted the maximum out of himself, in a fiercely determined attempt to secure success for the team.

As a result, he endeared himself to Tiger fans, who greatly admired the way he went about his football business.

Here is a list of Richmond's Homecoming Heroes since 2014...