Tigers valiant in fighting loss to Crows Skip to main content
Catchup on all the latest action from ${round}!
Previous
Next
Loading…
Watch every match live and on-demand...
Loading…

Richmond started bravely in its clash with the Adelaide Crows at the Adelaide Oval on Thursday night, and took a surprise 11-point lead into half-time, but Adelaide marched home to record a 33-point victory.

The Tigers were valiant. They answered every challenge from the Crows, with a depleted side refusing to lie down despite a series of setbacks through the week and on the night.

The Crows themselves weren't without adversity. Lachie Murphy missed the majority of the match, having his three front teeth loosened in an early collision, while Daniel Talia sat out a large portion of the second half battling a quad complaint.

Josh Jenkins also finished the match in worrying circumstances, clutching his knee following an awkward hyperextension in the dying seconds.

But they still had too much firepower where it counted against an undermanned opponent.

Jenkins kicked four goals from 17 disposals and seven marks, while Walker slotted three goals to complement 18 disposals and eight marks, five of which were claimed inside 50.

Siblings Brad and Matt Crouch also finished with 43 and 35 disposals respectively, while they combined for 18 clearances in a dominant midfield display. 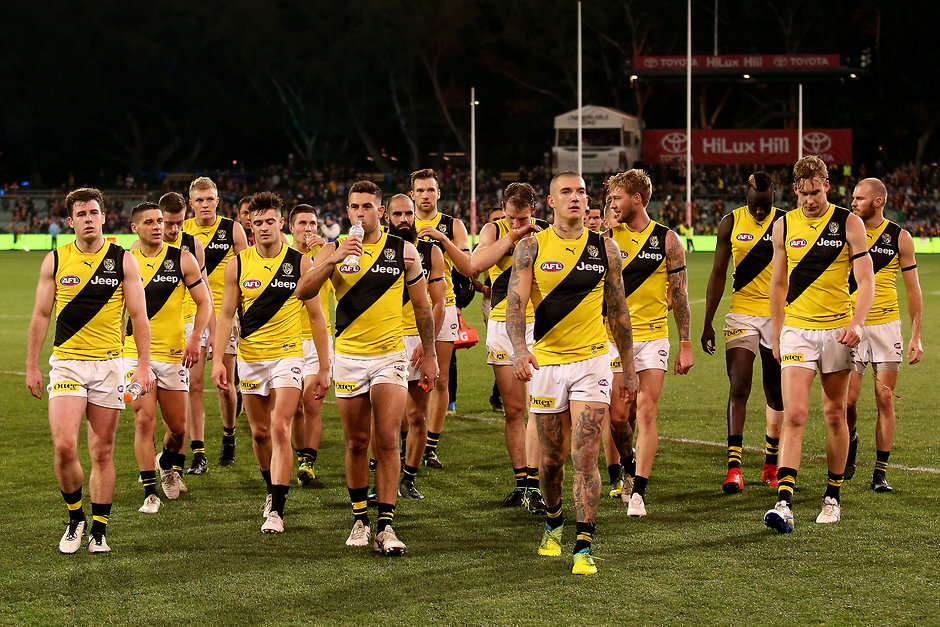 Co-captain Rory Sloane was his normally imposing self, racking up 28 disposals, nine clearances and kicking two majors in an influential performance out of the centre.

Richmond was personified by its temporary captain Dustin Martin, who led from the front all night to finish with 32 disposals and nine marks, as well as kicking two goals.

However, despite his efforts, the Tigers had too few able to provide the stand-in skipper with support, as the side's seemingly endless injury list continued to take its toll.

It was a match of stops and starts throughout a seesawing first half.

In the absence of both Toby Nankervis and Ivan Soldo, it was youngster Noah Balta who started as Richmond's first-choice ruck, with late inclusion Mabior Chol beginning the contest forward and kicking his first ever AFL goal in the game's opening seconds.

It came amid a sharp first few minutes for the depleted Tigers, who kicked three consecutive goals to start the game on their way to a handy 13-point lead at quarter-time.

Then came the first counter-attack.

Jenkins' goal on the stroke of the first break momentarily swung the momentum of the contest, leading to Adelaide piling on nine of the next 10 scoring shots.

Only some wayward kicking – and some solid rear-guard action from Richmond – ensured the visitors' narrow buffer remained intact late in the second term.

Then came the next counter-attack.

With Adelaide controlling the territorial battle, successive Richmond goals from Dan Butler and Daniel Rioli stopped the bleeding and extended a crucial Tigers lead at the main break.

It became a question of which side would take their chance to break the game open. The more the second half unfolded, the more it looked as though it would be the Crows.

Martin, sensing a moment to stamp his own unique form of leadership on the contest, intercepted and converted on the run to finally end the relentless flood of Adelaide scores.

It helped to ensure the match remained alive heading into an unpredictable final term.

Sloane and Jenkins each took strong contested grabs within minutes of each other, before converting calmly on the scoreboard to seal the fate of their plucky opponents.

Another classic from Eddie Betts on the boundary was the cherry on top for the Crows.

Adelaide: Lachie Murphy was ruled out for the game midway through the first quarter, having three teeth loosened after copping a knock to the head from his captain Taylor Walker. Daniel Talia missed the majority of the second half due to a quad complaint. Josh Jenkins hurt his knee in the dying stages of the game and was taken from the field on a stretcher.

Richmond: Having sustained a number of injury issues in the lead-up to Thursday night's match, the Tigers got through the game itself relatively unscathed.

After enduring short breaks heading into Thursday night's fixture, both Adelaide and Richmond will enjoy a bye in round 14.

Richmond ruckman Ivan Soldo is a late withdrawal from tonight’s clash against Adelaide, with Mabior Chol coming in to take his place.