The Richmond forward combination of Jack Riewoldt and Josh Caddy is the most potent in the AFL competition after 21 rounds of the 2018 season.

They have scored a total of 97 goals between them so far – Riewoldt 58 and Caddy 39.

That’s five more than the next best two-forwards pairing, which is Hawthorn’s Luke Breust (50 goals) and Jack Gunston (42 goals).

Riewoldt’s 10-goal blitz in the Tigers’ big victory over Gold Coast at Metricon Stadium last Saturday has catapulted him into equal first place in the 2018 Coleman Medal race alongside North Melbourne’s Ben Brown, while Caddy, who booted four goals against the Suns, has moved into equal 10th place. 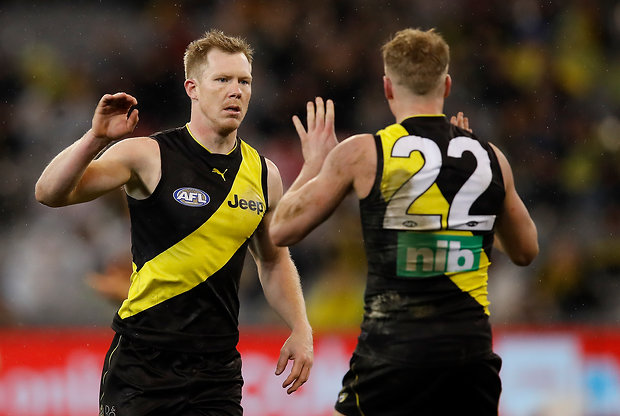 Exciting, young Richmond small forward Daniel Rioli has made impressive progress since his delayed start to the season while recovering from the broken foot he sustained in the 2017 Grand Final triumph over Adelaide.