7. Dan Butler
The 2017 AFL premiership player has played a crucial role in this finals series, with his speed, aggression and class up forward proving invaluable. Three goals in the final term dragged Richmond over the line in its come-from-behind qualifying final win over Essendon.

16. Mav Weller
The hard-as-nails on-baller has brought a wealth of experience and leadership into this group, guiding the young midfield brigade and looking damaging inside 50. Weller’s grit and determination will prove vital if the Tigers are to combat the steely Williamstown midfielders.

21. Jacob Townsend
What more can you say about Townsend—tough, uncompromising and driven. The 2017 J.J Liston medallist and 2017 AFL premiership player has taken his game to another level in 2019. Townsend has added layers of guidance and leadership that will hold Richmond in good stead in its quest for ultimate glory.

26. Riley Collier-Dawkins
The young bull from the Oakleigh Chargers looks primed for a shot at premiership glory. At 193cm, Collier-Dawkins adds another dimension to an already damaging Richmond midfield and will bring ferocity at the ball and the man into this game.

27. Jack Ross
Another midfield bull from the Oakleigh Chargers, Ross plays with a level of maturity beyond his years rarely seen from a first-year player. Kicked his game up a level in the preliminary final win against Port Melbourne and certainly won’t be overawed by the occasion.

28. Fraser Turner
The smooth-moving wingman from Clarence has been one of the Tigers’ most prolific ball winners this season. A running machine, Turner has grown into his role as the year has gone on and will enjoy the vast expanses of Ikon Park.

31. Oleg Markov
The electric Belarussian was shifted forward in the final term last week to great effect, slotting two crucial goals in Richmond’s preliminary final win. Markov’s strengths are his speed, athleticism and versatility and if played deep forward, will prove a tricky match-up for the Seagulls.

32. Luke English
The hard-working and diligent first-year midfielder has been set some big tasks throughout the year in quelling the best midfielders in the competition and has done so without fuss or fan-fare. He too has grown into his role as the year has progressed and hit the scoreboard consistently in the back-half of the year.

33. Kamdyn McIntosh
The wiry wingwan from Pinjarra has found himself playing down back of late to add another layer of versatility to his game. Another Tiger who tasted AFL premiership glory in 2017, McIntosh’s poise and running power proved vital in the final term of last week’s win over Port Melbourne. Another who will enjoy the extra space that Ikon Park will provide. 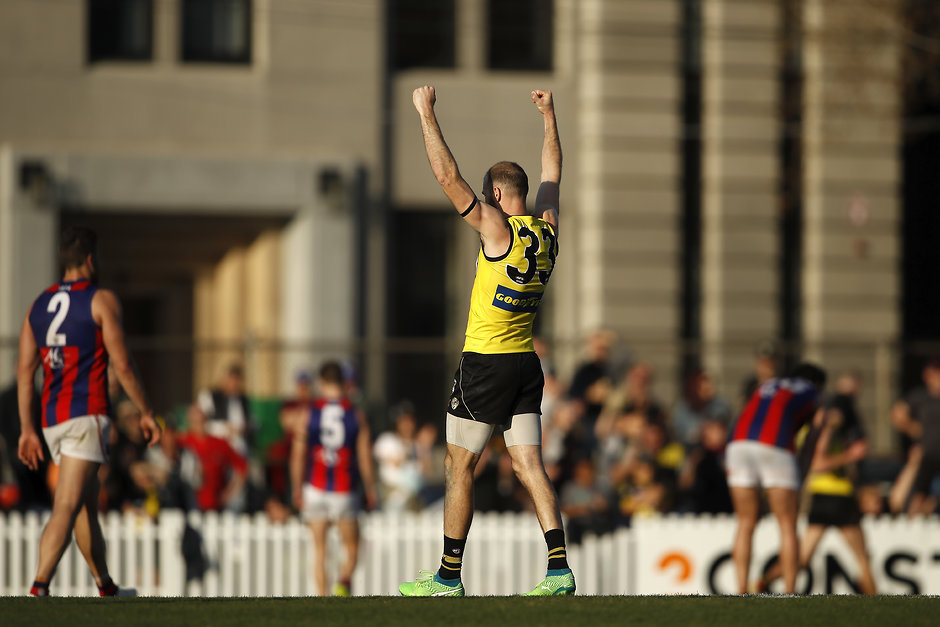 36. Callum Moore
Injured for most of the year and relatively quiet for the first three quarters last week, Moore exerted his influence on the result in superb style, using his speed and athleticism to great use inside 50. Dragged down a crucial mark late in the game last week and steeled himself to slot the goal. On his day, one of the best key forwards in the competition.

37. Connor Menadue
In his fifth year at Tigerland, Menadue has become a vitally important cog in the Richmond machine and produced arguably his best game to date with 26 disposals and three goals in the Tigers’ preliminary final win over the Borough. A shift into the midfield has turned him into an inside/outside player, with his ball-winning ability, coupled with his running power proving lethal.

38. Noah Balta
There aren’t too many positions on ground that Balta hasn’t found himself playing in this year, key back, ruck, key forward, midfield and probably a stint here and there on a wing. The dynamic and enigmatic Tiger was thrown into the ruck in the second-half last week to great effect. His booming disposal by foot cleared congestion and allowed Richmond to get the game on its terms. The stage seems set for Balta to take charge.

40. Callum Coleman-Jones
The second-year ruckman will look to increase his standing in the game when he locks horns with Williamstown monolith, Nick Meese. Coleman-Jones’ development since joining the Tigers in 2017 has been astronomical and will look to use his marking prowess, ball-winning ability, cunning and running power to work over Meese in what looms as a decisive battle.

41. Mabior Chol
The athletic and smooth-moving ruck/forward had a tough day at the office against Port Melbourne before seizing his moment late in the final term, kicking the sealing goal. Chol has split his time between VFL and AFL level this year and the Tigers will be looking for him to bring his best against Williamstown.

42. Ryan Garthwaite
Garthwaite saved his best for when it mattered most, producing a masterful defensive display in the Tigers’ win over the Borough. The iron-fisted key-back was also the chief interceptor last Saturday and looks primed to assume his role against the Seagulls.

43. Derek Eggmolesse-Smith
Richmond’s inaugural Next Generation Academy selection was rewarded for his stellar form in 2019 with an AFL debut. The damaging left-footer possesses the enviable blend of defensive prowess and attacking flair and was at his best in the last quarter against Port Melbourne. Will assume his role at half-back and penetrate the Seagulls’ forays forward.

44. Sydney Stack
One of the stories of 2019, Stack has launched himself to cult-hero status, endearing himself to the football public with his unflinching attack on the ball and man as well as his poise and precision with ball in hand. Whether deployed down back, up forward or through the midfield, Stack is built for finals and will look to team seamlessly with WA prodigy, Marlion Pickett.

45. Patrick Naish
The silky wingman was the Tigers’ leading vote getter for the 2019 J.J Liston Medal and showed why with his last quarter performance against Port Melbourne. Naish kick-started the fightback with the first goal of the final term and sealed a memorable win, curling home the last. Is as damaging as anyone in the competition with his disposal by foot if allowed sufficient time and space.

46. Ben Miller
The WA key position project has been thrust into multiple roles in 2019, be it key back or key forward. Miller looks at home at either end of the ground and has fantastic speed and endurance for a 195cm player.

50. Marlion Pickett
Picked up by the Tigers in the 2019 mid-season draft, Pickett has proved a revelation since crossing from South Fremantle. Trialled in multiple roles, the smooth-moving West Australian seems to rise as the stakes become higher and has been the player of the finals series thus far. The stakes rise once again at Ikon Park and you can just about bank on Pickett rising with them.

51. Steve Morris
The Richmond skipper was at his inspirational best in the win against Port Melbourne and the Tigers will turn to Morris to put in a similar performance against Williamstown. Morris’ hellacious attack at the ball and man will be vital on Sunday.

53. Hugh Beasley
The VFL full back of the year put in his best performance to date, going head-to-head with Borough spearhead, Jordan Lisle. Beasley controlled the defensive half superbly, quelling the influence of Lisle and propelling Port Melbourne’s thrusts forward. He will be called on once again to be at his resolute best against Williamstown.

54. Jacob Ballard
The bullocking on-baller is built for finals and is a much-loved figure at Tigerland and will slot seamlessly into the midfield or up-forward against the Seagulls.

55. Lachlan Street
The versatile Street has been a revelation since being recruited into the VFL program from Frankston YCW. Street’s ability to remain calm in traffic and push hard both ways has seen him play in Richmond’s two finals wins and will look to play to his strengths in the Grand Final.

56. Blake Grewar
The inside-midfielder is sharp and tough around the contest and a classy finisher in front of goal as well as an outstanding leader.

64. Tom Silvestro
The running machine and flint-hard wingman is somewhat of a spiritual leader and barometer at Tigerland. A selfless and unflinching player that looks right at home in September.

78. Dan Coffield
Selected in the VFL team of the year, Coffield was an unlucky omission from last week’s preliminary final team but has been one of the most consistent performers for the Tigers this year. One of the best interceptors in the game, Coffield launches plenty of attacking chains from the defensive half and proves extremely hard to avoid.